A twist on a moussaka think ratatouille meets goulash in a 30-minute pressure cooker dinner. This hearty soup was made one night when the time was short and the plan for the ingredients was a moussaka. I needed to shop for mince which I never managed to do, so I defrosted some bavette steak from the freezer which I chopped into small cubes.

The dinner was well received by my family, one doesn’t like courgettes and aubergine the other does like beef chunks, I do love living on the edge! The moussaka soup was so delicious that they all ate everything.

It was quick to come together, all I did was fried onions and peppers (not traditionally added to a moussaka but I needed to use the pepper) adding chopped courgettes, aubergine and allowing that to brown a little, then the pieces of beef were dredged in a little seasoned flour and browned with the courgettes and aubergines. A tin of chopped tomatoes was added plus a tin of water. The lid of the pressure cooker was put on and 30 minutes later the soup was ready. The speed was down to the bavette steak, if you are using stewing meat you will need to cook the meat for at least an hour or according to the instructions on the packet. If you do not have a pressure cooker make the soup on the stovetop, cover and simmer for as long as it takes for the meat to soften or baked in the oven as a casserole.

On a cold winter’s night, it was a taste of the familiar without the hassle of frying vegetables, making a bechamel sauce and baking the moussaka for an hour. You could add chunks of potato for a heartier dish, they too were on the list of ingredients I was supposed to buy. Truth be told they were not missed. The parsley sprinkled over at the end freshens the soup and compliments the flavours well.

The soup thickened naturally and with a little dusting of flour on the meat and the aubergines pureed down they give the soup a natural thickening silkiness. We discussed crumbling feta over the top, but all felt it was tasty without it.

For vegans, omit the meat and add potatoes, it is a ratatouille soup. 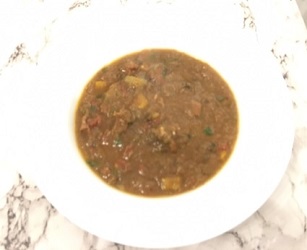 Print
Preparation time
15 Minutes
Cooking time
30 Minutes
Total time
45 Minutes
A hearty thick and silky soup that is a twist on moussaka and ratatouille.
Marissa: www.marissa.co
Recipe type: Soups
Cuisine: Greek
Servings: 6
Ingredients
Method
Tips
If you do not have a pressure cooker make the soup on the stovetop.
Keep the steak aside.
Follow the recipe for the vegetables and add the water reducing the soup for around 35 minutes or until the vegetables are tender.
For the steak, dredged in flour and fry in a frying pan until sealed, but still rare.
Add to the meat to the soup for 5 minutes and serve immediately or test a piece of meat to check that it is cooked through and tender.
Any overcooking will lead to the meat being very chewy if you do overcook the meat simmer for another 30 minutes until the meat tenderises.
Wordpress Recipe Plugin by EasyRecipe
3.5.3251
This is a lovely hearty soup to make and enjoy.