A Recipe for Cinnamon Syrup to Make a Refreshing Drink or Drizzled over Pancakes. With Shrove Tuesday coming up I was thinking of a different addition to the pancake table. Last year we had Salted Caramel Sauce and it was a tasty addition to the table. This year I have made a light cinnamon syrup.

Think cinnamon and sugar just in a delicious liquid form. Truth be told I was sent a recipe from Italy for a dessert when I read the syrup ingredients I knew the ratios were wrong but I have a habit of tweaking ingredients before trying the authentic recipe, so I made it as it was sent. Surprise surprise the ratio was wrong. So I boiled the syrup for 30 minutes and was left with a delicious light deeply cinnamon flavoured syrup.

Thinking what to do with the cinnamon syrup, I decided to use it as a cordial and oh my word it is so refreshing. Just a few tablespoons of syrup (or adjust the cordial to your taste) top the glass up with cold water, ice cubes if it is really hot and you have a honey-coloured glass of refreshing, delicious cinnamon tasting water.

I know sugar is still not cool, but if you are melting in the southern hemisphere this is a great way to keep your energy up.

Here is a reminder of the health benefits that cinnamon can have on your body:

It is high in manganese

Cinnamon extract has been used to alleviate gastrointestinal problems 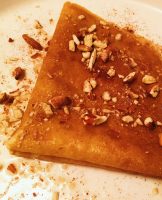 I hope you enjoy the taste of this cinnamon syrup as a cordial or over a stack of pancakes.