Tava is a traditional Cypriot dish made with small chunks of lamb and rice flavoured with whole cumin. The Dutch oven that they are cooked in is surrounding by slices of thick potatoes and onions. The pototaoes in Tava were added to protect the sides of the rice from burning and were a prized find for a potato lover like myself.

In my maternal grandmother’s days in Pano Lefkara, Cyprus in the 1930’s the dish would be walked down to the communal oven and cooked whilst they were at church on a Sunday. A Greek Orthodox Sunday service is between 2-2 1/2 hours plus the socialising time. The dish would be collected on their way home.

I decided to harness the flavour which was traditionally a delicious addition to a main course and made them a side dish, in their own right. They complimented our lamb on the souvla (rotating BBQ) beautifully and would be a delicious addition to a Sunday roast served with middle eastern flavours and perhaps my Harissa Yogurt Sauce on the side. Vegans and Vegetarians can enjoy these Tava potatoes as part of meze style lunch with dips, my marinated artichokes and salads.

The recipe is easy, use potato wedges or slices of potatoes and they both work well. The sliced potatoes can be made into a bake sprinkled with crushed cumin seeds, and topped with slices of tomato and optional thin rings of onions with a little stock to moisten the dish as it cooks. 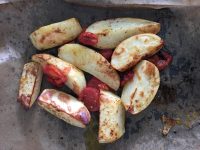 Print
Preparation time
15 Minutes
Cooking time
45 Minutes
Total time
1 Hour
A take on a traditional Cypriot dish from the village of Pano Lefakara, the village of my maternal grandparents. Tava is flavoured with cumin, tomatoes and onions and I have used this base to make a tray of potatoes to compliment my BBQ.
Marissa: www.marissa.co
Recipe type: Mains
Cuisine: Greek Cypriot
Servings: 4
Ingredients
Method
Wordpress Recipe Plugin by EasyRecipe
3.5.3251


These cumin flavoured Tava potatoes are delicious on their own with a salad, eaten with Mediterranean dips, for a vegan or meat free Monday meal, a side to roast lamb, pork. beef, chicken or fish. 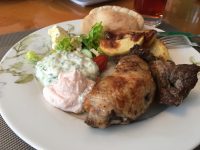