The smell of a pot of curried mince fills me with childhood memories, we never ate this at home but the mums that ran the tuck shop at school would cook cauldrons of the mince and sell huge amounts of toasted curried mince sandwiches in our lunch breaks. The smell would meander along the corridors, as you changed classrooms and you would wish lunch would come faster.

Mince in its varying forms is a family staple, as is curry.  Most of my friends will have a version of Thai, Indian or a Japanese curry in their weekly meal repertoire. This straddles the need to use mince in the week’s budget meal and the love for curry most families have.

My amazing friend Manisha makes a wonderful version that is flavoursome. Manisha’s recipes are delicious, if you love aubergine try her recipe for aubergine curry. I made it the other day but didn’t have to roast the aubergine and just cubed the flesh and made a quick curry using her spicing, it was really good.

I do love versatile recipes and the curry mince could:

Served as bowl food over rice, cauliflower rice with chutney

Served as you would chilli con carne but with sides of chopped salad, raita and popadoms or naan bread

Served as part of a Indian buffet or party menu, with the aubergine curry or any of your favourite vegetables curried

In a toasted sandwich

Or as my boys asked for it as a Sloppy Joe (piled into a baguette) with an added handful of grated cheddar cheese and baked in the oven, just to melt the cheese. You can skip the melting of the cheese.

Curried mince really is so versatile.

I made a double batch and filled a container to give to my daughter at uni. It freezes well and easily can be a standby family meal too. I must say with any saucy mince dish, l always double the recipe as if you are going to the trouble of boiling a pot for 500g of mince you may as well add another 500g and get ahead on days when you are pushed for time.

This recipe can easily be made with quorn mince for vegetarians or any vegan friendly mince, they unfortunately aren’t able to be frozen. 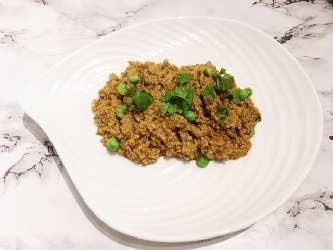 Print
Preparation time
10 Minutes
Cooking time
1 Hour
Total time
1 Hour 10 Minutes
A delicious cost-effective fragrant meal that will be enjoyed by the family mid-week, friends for an Indian style meal, a warming dish to served on Halloween and wonderful in a toasted sandwich like they served in tuck shops in the 1980s.
Marissa: www.marissa.co
Recipe type: Mains
Cuisine: Indian
Servings: 4-6
Ingredients
Method
Wordpress Recipe Plugin by EasyRecipe
3.5.3251
Enjoy this quick and easy recipe.